So I happened upon on interesting tidbit of information while patching an AudioCodes SBA today. Unfortunately I was trying to fix a customer issue so I didn't take the time to do screen shots... I'll try to update in the future with a set of screen shots, but hopefully the words will be enough for now.

It used to be on Lync 2010 SBA with AudioCodes they wanted you to patch only by the web interface, I never understood why we couldn't just run the LyncServerUpdateInstaller.exe on the desktop and be done, but like a good installer I know when to push limits and patching ain't one of them. In order to do this you had to extract out 4 patches, which matched up to the components listed in the screenshot below. The screenshot is from a 2013 system, but the 2010 system looks similar. 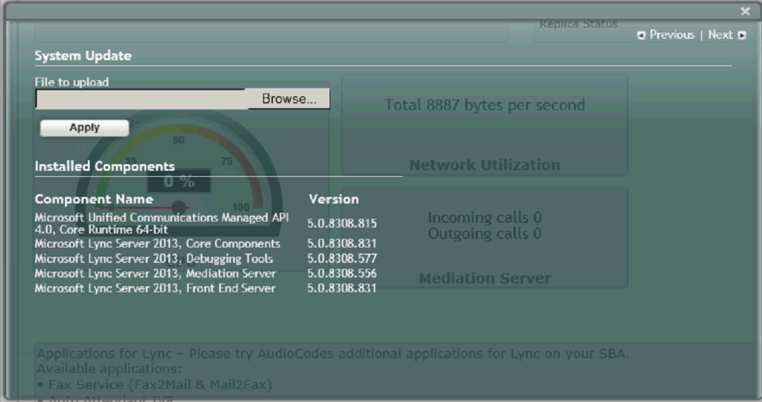 Fast forward to 2013 SBA and I dutifully patched all the components listed. However, I happened to run the LyncServerUpdateInstaller.exe just to check and low and behold the Windows Fabric component still needed to be updated. With a big sigh... I got that .msp file and uploaded via the web interface and it said the update completed successfully... Sweet!

Wait... lets check the LyncServerUpdateInstaller.exe file again... nope not updated. "Oh wait" I said to myself in my head... I think it needs a reboot. One reboot later... still not updated.

I finally ran the LyncServerUpdateInstaller.exe and kicked off the update from there... which did require a reboot and low and behold it is now updated.

So with this new found knowledge I decided to go pull down the latest AudioCodes 2013 SBA Update Product Notice from AudioCodes related to updates and guess what? RDP patching is now one of the methods specifically called out. Also of note in that PDF, when you are patching via the web method there is zero mention of the Fabric Update.

I also did check the latest AudioCodes 2010 SBA Update Product Notice and it allows RDP update too...

But here is the morale of the story for Lync 2013 SBA, patch only via RDP interface for AudioCodes to get all the updates on the box.

You may or may not be able to apply this knowledge to Sonus. Feel free to give feedback if you have experience in that area.
Posted by Jonathan McKinney at 11:00 AM