I was sent a Plantronics Voyager Pro UC v2 to review with no strings attached. This review has had no influence from Plantronics or any of their partner companies. 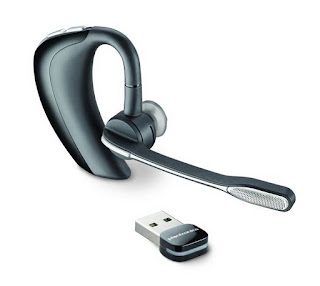 For me, the important qualities to have in a headset:
Comfort
As with the Savi 430, I previously reviewed, the comfort is amazing. I can wear the Voyager Pro all day long and hardly notice it is there.
I finally found out why Plantronics headsets are so comfortable. They test all their headsets on their wall of ears. In the video below, they actually show how the ears are made which can be kind of gross, but my point is that they put a lot of effort into testing their designs on lots of different ears.

http://www.youtube.com/watch?v=rx-oMIY2xMk
Sound Quality
Sound Quality is great as long as you are not a great distance away from your PC or cell phone. In my house, I can typically go at least 30 ft and sometimes further, which is pretty typical for Bluetooth devices.
Noise cancelation is also great! I drove around in my Diesel Excursion and the person I was talking to couldn't hear the engine noise. I also kept turning up the radio until the caller could hear it on the phone conversation. It was surprisingly louder than I expected before it came through.
I've also been testing around my home office and the Voyager Pro UC does a great job of eliminating the noises of my family (I have five kids).
Don't get the impression though that my kids are running around like wild animals... if they did that I'm not sure it could handle that amount of noise.
Travelability
Plantronics got it right on this headset. Not only does it fold flat, but they have provided a carrying case that is compact. The case is also stiff enough to throw into a laptop bag and not worry about it. The headset fits snugly in the case and there is an additional pocket for the USB Bluetooth dongle.
The case does have a belt clip, but I have yet to wear it on my belt because I hate having things attached to my belt. 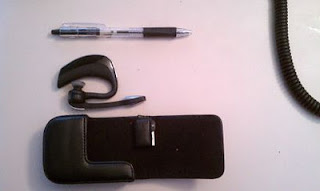 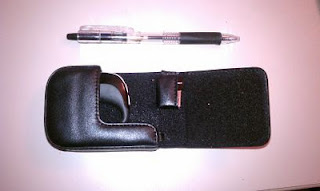 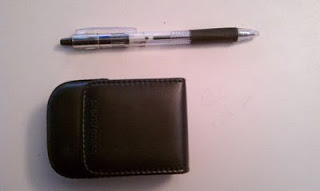 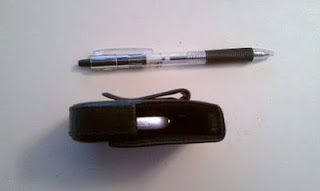 Battery Life
The Voyager Pro UC v2 has a stated Battery Life of up to 6 hours. Although I would prefer more, I'm not sure I would trade the additional talk time for less comfort.
When recharging the headset, the charge time can take as long as 1.5 hours.
Charging is done by plugging in an AC charger or USB cable (both are provided). There is no headset charging stand like the Savi 430.

Ease of Setup
So many electronic gadgets take a fair degree of intelligence to get any real benefit from them. The new Voyager Pro UC worked with Microsoft Lync out of the box with no configuration needed whatsoever!
Again, a simple procedure to pair with my smart phone and it simply worked.
All the controls are easy to find on the headset by touch. Also, when you press a button, there is either an audible tone or a voice in your ear giving you feedback as to what you just did.
One of my favorite audible feedbacks is pressing the power button and the headset will tell you how much talk time is left.
Hold down both the volume up and volume down and your mic is muted or unmuted (with an audible confirmation).
I also have to make mention of the new sensors that actually detect when the headset is on the ear... Absolutely brilliant. With Microsoft Lync you can actually answer a call by simply putting the headset on. With a cell phone it will do the same, but will also switch back to the cell for audio if you were to take off the headset.
Would love to see an improvement with Microsoft Lync where a user could specify a default device for the headset to switch to when the headset is not worn. Also, have the ability to switch from any other Lync device to the headset when it is put on.

Conclusion
This is definitely a headset that should be considered for any information worker that spends a great deal of time on the phone.
Also, because of the bluetooth features and carrying case, this headset excels for those that are road warriors that need a headset for in the office and when traveling.
I wouldn't hesitate recommending this headset to any of my customers.
Posted by Jonathan McKinney at 12:01 PM No comments:

I don't have much information on the technical side of this solution but I thought I'd share the video because Polycom is using contextual integration with a Silverlight extension.
I haven't seen many 3rd Party developers using this yet, but I expect this to be an exciting area to extend the UC experience.
http://www.youtube.com/watch?v=QR1k7AUwfuc
Posted by Jonathan McKinney at 8:28 AM No comments: